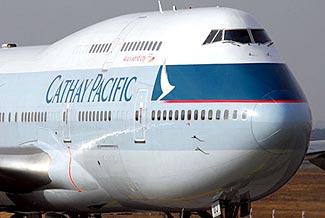 Those of you who only receive the weekly newsletter may have noticed no newsletter last week (daily and express readers will have still received articles during the week).  Apologies for that.

On Tuesday evening last week I seized an opportunity to enjoy Cathay Pacific's business class on a roundtrip to Hong Kong, traveling a mere 36 hours later on Thursday morning and returning back this Tuesday.  I did plan to still issue a newsletter, and was doing a good job of getting one written while waiting for the flight to Hong Kong on Thursday in the lounge they share with BA in San Francisco.  But…

Alas, the lounge had despicably slow Wi-Fi (speed tests showed it to be 230kb – 248kb down and 170kb – 216kb up – in other words, a download speed 40+ times slower than I rely on at home) which not only slowed down the writing but also meant I couldn't back up and save what I was doing as often (due to it taking such a long time for each save).  Murphy's Law saw an opportunity to attack, and sure enough, one of the Frontpage crashes I sometimes suffer caught me at an unsaved point and I lost most of the newsletter.  I ran out of time and energy to recover.

That was far from my only challenge during the very short time I was away.  Shortly after arriving in Hong Kong, my Visa card stopped working.  The hotel I was staying at said there was no way for me to make a collect call from my hotel room to the Visa service center in the US, so I ended up using Skype to call them from my laptop on a data line that was barely able to manage a voice call.

Long waits on hold were followed by the discovery that the emergency number on the back of my credit card to call no longer leads to the correct department, followed by transfers to a second department who then had to transfer me to the correct 'fraud' department – and each time this happened, three times in a row, I was then cut off during the second transfer.

It ended up taking almost 90 minutes to get through to a mindless girl in the fraud department who started to parrot the 'for your convenience and protection….' nonsense in what was surely a doomed to failure attempt to make me feel good about the problem, before I rather rudely told her I felt neither convenienced nor protected.  Quite the opposite, especially because in June the fraud department had promised they would allow my card to be used on an unrestricted unlimited basis internationally for a year.

I had an interesting experience booking a hotel for my time in Hong Kong.  As I invariably do when booking at the last minute, I turned to Priceline.  On this occasion, Priceline couldn't help me get any deal at all – quite the opposite.  It was asking appreciably over the going rate on regular hotel booking websites for rooms.  This is mentioned in an article further down tonight's newsletter, and I've updated my four part How to Book Good Value Hotel Rooms Using Priceline to warn of this possibility.

On the plus side, the Cathay Pacific flights were generally pleasant and good, although both flights were delayed, as was also the inbound flight to San Francisco, so for the three longhaul flights I had personal knowledge of, all had significant delays.

My return through Vancouver, Canada involved the sorry and surprising loss of a nice bottle of single malt whisky.  I had been expecting to be reunited with my suitcase briefly, somewhere in the process between getting off the inbound flight, being cleared through US Customs and Immigration in the Vancouver pre-clearance facility, and before then flying on down to Seattle, with the plan being to put the bottle in my checked bag.

Alas, these days Vancouver Airport has a wonderful new system for internationally arriving passengers transiting directly to a flight on to the US.  You take a special path through arrivals, ending up at a booth where you show them your bag tag, which they scan and then display a picture of your bag on a color screen.

'Is this your bag?' I was asked.  I replied in the affirmative, and that was that.  The bag's picture vanished off the screen, and the bag itself, wherever it was, moved on directly to the plane, untouched by me.  There was no chance to actually get to my bag to put the bottle inside before the US-bound flight, and even though I'd never been out of a secure part of the terminal and was carrying the whisky in an officially sealed duty free bag from Hong Kong, I was not allowed to take it through the security rescreening and so gave it to an Alaska Airlines ground staff member.

Sometimes there is a sting in the tail of progress, isn't there.

I couldn't help contrasting this trouble-free process, whereby I never needed to fill out any Canadian arrival forms, or interact with any Canadian Immigration or Customs officials, with the US' insistence that all passengers changing planes in the US must clear US Immigration and Customs, whether the passengers plan to leave the airport or not.

Indeed, the US is so extremely different to Canada that not only does it require transiting international passengers to go through US Immigration and Customs, it also requires all personal details of passengers on planes simply flying over the US, without ever landing anywhere in US territory, and on occasion in the past, has refused to allow a plane to overfly US territorial airspace due to not liking a passenger on its passenger list.

Which do you think is the better system?

I'll be publishing a full review of my Cathay Pacific flights probably next week.  For this week, the feature article series are the second through fourth parts of a series started last week on home security video systems.

The next item in the newsletter tells you more about this series, and if you missed the first part last week, don't worry – there's a link to it from all the next three parts of the series too.

It sure was a wonderful feeling being able to keep an eye on what was happening with my house, all the way from Hong Kong, and being sent email messages whenever the outside camera detected motion – for example, when the UPS man dropped off a package at the doorstep.

It is great, when you're away from home for some days or weeks, being always informed if anything untoward might be occurring, and being able to watch realtime video from your security cameras to see exactly what's up.

Included in this article series is an amazing real true-life video clip of burglars in a person's house, overlaid with the home-owner's 911 call to the police, alerting the police to the fact her house was being burgled (the woman was at work at the time).  The video concludes triumphantly with police arresting the two burglars and searching the house for other burglars – it was interesting also to see footage of the police at work, clearing a house 'for real'.

My Front Sight training caused me to appreciate that the police in the video were not doing a good job at all, and were dangerously exposing themselves to any criminals who might still have been in the house and wishing to fight back (part of Front Sight's four day course teaches you how to clear your own house, including a live-fire exercise through a training house with a mix of life-size friendly and hostile figures).

One of the things I lost with my crash in the BA lounge last week was what I felt to be some excellent writing on the current controversy about new TSA procedures, variously to do with the possibly dangerous X-ray whole body scanners, and with the new ultra-intimate pat-downs.

I do intend to still publish a piece on this topic, with some analysis of what this all means and what the alternatives could be/should be; for now, may I refer you to a piece published last week that you probably didn't get to see in which I point out the current politically correct nonsense that allows people wearing turbans to pat their own turbans down (true!) but which requires uniformed credentialed pilots carrying pistols to be fully intimated searched.

I fear that political correctness will be the death of us.

One more thing on this growing controversy.  Advocacy groups are calling on all travelers to opt out of whole body scans on this coming Wednesday, 24 November, and suggest you ask for a pat-down search in a private room rather than in public, and ask for a witness to be present.

If you're traveling on Wednesday 24th, I urge you to join this protest.  It is time for the American public to protest about being subjected to more brutal screening procedures than apply to any other passengers in any other country in the world.

You can't effectively join the protest if you're as fortunate as to go through one of the older walk-through metal detectors, but if you're told to go into a whole body imaging booth, say 'I Opt Out' to the screener, which will oblige them to give you a pat down instead.  The rest is up to you, and if you have spare time prior to your flight, ask for a private room and a witness too – I'm not sure about your rights with respect to having a witness present, but apparently asking for a private room is also something you can request and require.

If you're not willing to join this protest, there's a slight chance that security lines might be longer than normal, so give yourself some extra time at the airport on what will be a very busy day for travel anyway.

Also this week is a well deserved thank-you to Qantas.  Their uncompromising approach to the highest possible safety standards has actually penalized them, with some ill-informed people thinking their decision to ground their entire A380 fleet two weeks ago, and to keep them grounded indefinitely, reflects poorly on Qantas, particularly because no other airlines grounded their A380 fleet for more than a day.

In actual fact, the opposite is true.  Qantas' actions show their impeccable approach to safety, no matter what the cost to their revenue (and, so unfairly, to their reputation).  Read the article, a couple below, to find out why (and my additional discussion on the topic in the airline roundup section).

There's also an interesting article about how Amazon is now selling an eBook which its own Kindle eBook reader can't properly display.  How crazy is that?  The bottom line has to be to expect a new model Kindle coming sometime very soon now, particularly because it seems that Barnes & Noble may have stolen a lead over Amazon with their newest Nook Color eBook reader – a reader which in some important respects is better than the Kindle (to say nothing of the iPad as well, of course).  The Kindle, something that was ultra-sexy and ultra up-to-date just six months ago, is now starting to show its age badly.  Perhaps no longer a good choice for a Christmas gift item.

Well, without further ado, on with the rest of this week's newsletter.  Until next week, please enjoy safe travels, and of course, have a great Thanksgiving.

Those of us in the US are truly blessed to enjoy life in a country which, for all its shortcomings, challenges, and problems, is still one of the very finest places in the world to live.  We have much to be thankful for.