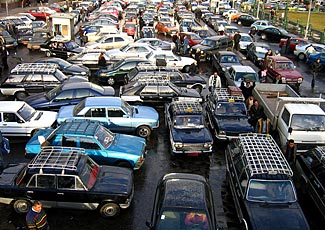 Congratulations to China for setting a new
world record for the world's longest traffic jam.  I think in this
case the word 'longest' means not length from start to finish (it is a
mere 60 miles long) but rather the word takes two other meanings.
The longest lasting (it has been in place for 11 days so far) and
taking the longest to travel through it (vehicles are moving at
an average rate of 2 miles per day).  Read

this article then count your blessings next time you're stuck on
your local freeway for 15 minutes in rush hour.

And commiserations to the Italian designers
of four self guiding driverless cars.  The cars were unable to cope
in Moscow, due in part to "the unmanned vans' impulse to stay within the
traffic lines was futile given the chaotic driving patterns [in
Moscow]".  Details