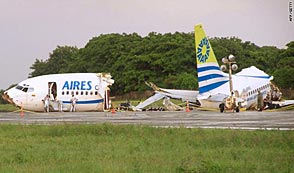 Many people perceive plane crashes as
doomsday events in which everyone surely perishes.  But this is far
from always the case, indeed, most people in most plane crashes survive.

Look at the featured picture alongside this
article.  The plane crashed upon landing, in bad weather, early
Monday morning, completely breaking apart, and spilling some of the
passengers in the broken area onto the runway.  It was carrying 131
passengers and crew.  Guess how many survived?

This isn't just a 'fun fact'.  In my
article series on

How to Survive a Plane Crash I point out the surprisingly positive
truths of the survivability of plane crashes (which are extraordinarily
rare events anyway) and tell you what you need to know to shift the odds
in your favor, including a rebuttal of one of the conventional wisdoms
that in actual fact might massively reduce your chances of survival.
Between 50% and 75% of passengers survive in major/serious crashes, and
more than 95% in all crashes.

More importantly – and this is the reason to
carefully read my article series – it is estimated that something like
30% of passengers who do die in plane crashes could have survived if
they had acted appropriately.

And the answer to my question above?
At present, there has been only one fatality, although a few more are
fairly seriously injured.  Details