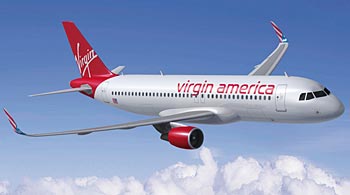 Virgin America announced plans this week to
double its fleet from 45 to 90 A320 series airplanes by 2016, choosing
planes with the new 'sharklet' option (vertical winglet at the end of
each wing as pictured here) that will add a further 3.5% to the planes'
efficiency.

In addition to doubling its fleet, it will
also aggressively grow its route network.  Currently it serves
eleven destinations (the latest addition being Orlando, to start from
October 6), including now international service to Toronto (from 23
June), and hopes to be adding two Mexican destinations shortly.  It
says it will offer service to 30 cities by 2016.

Virgin America started operations in August
2007, after years in the planning process.  Sir Richard Branson's
UK based Virgin Group has a 25% minority shareholding, with the airline
deemed to be a US owned and controlled airline.  It is based in San
Francisco.  While not a particularly 'low fare' discount airline,
it is a 'full service' airline with excellent service, on-board
entertainment system, and positive friendly staff.

Virgin America has been awarded the title of 'Best Domestic Airline' by
Travel + Leisure for the last three years in a row.  Clearly it
is succeeding in its desire to be a high quality good service airline,
and the news of its further growth is great news for all of us in the
present and future cities they will fly to.